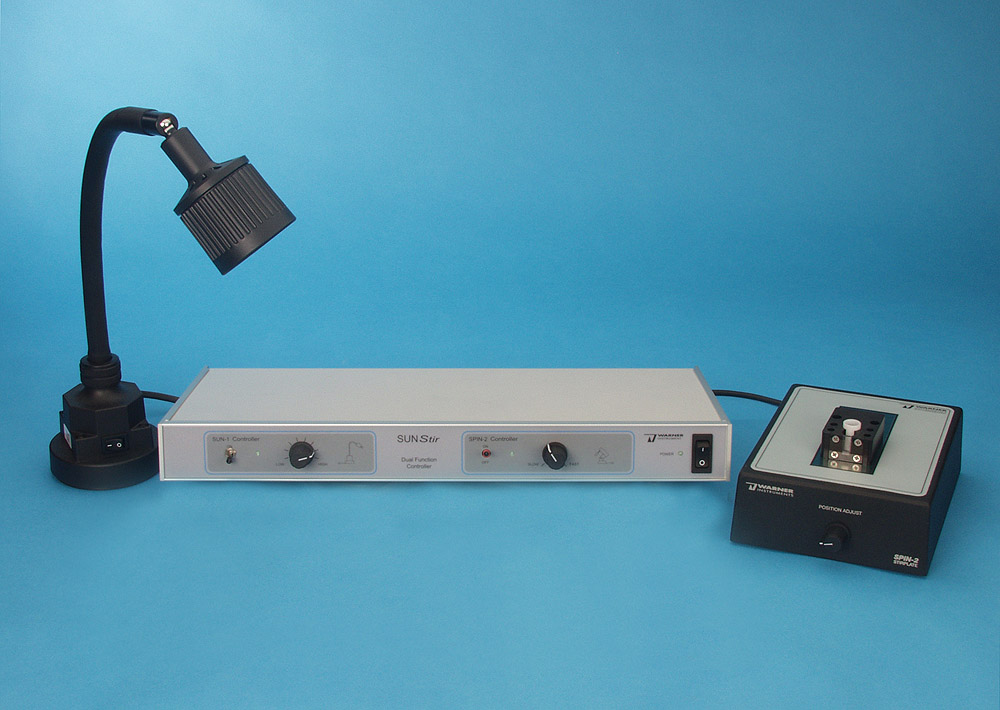 The SUNStir controller is a rack-mountable instrument designed to provide quiet and efficient control of the SUN-1 Lamp and SPIN-2 Stirrer.

The SUN-1 is an externally controlled, noise-free halogen light source suitable for inclusion in a shielded enclosure. The magnetic base attaches securely to any steel tabletop and the lamp swivel-head allows projection of the beam in virtually any direction. Recent modifications to the design of the reflector result in significant improvements in the lamp's performance.

The lamp is comprised of a magnetic base with 12" gooseneck for accurate positioning of the illumination spot. A jointed swivel-head at the end of the gooseneck allows the beam to easily subtend a solid angle of 2 steradians (half of a sphere).

Beam intensity is adjustable to one of eight levels via the rack-mount controller. The lamp electronics are well isolated to prevent the introduction of external EMF into the Faraday cage enclosure and allows recording of data even while the lamp is on. 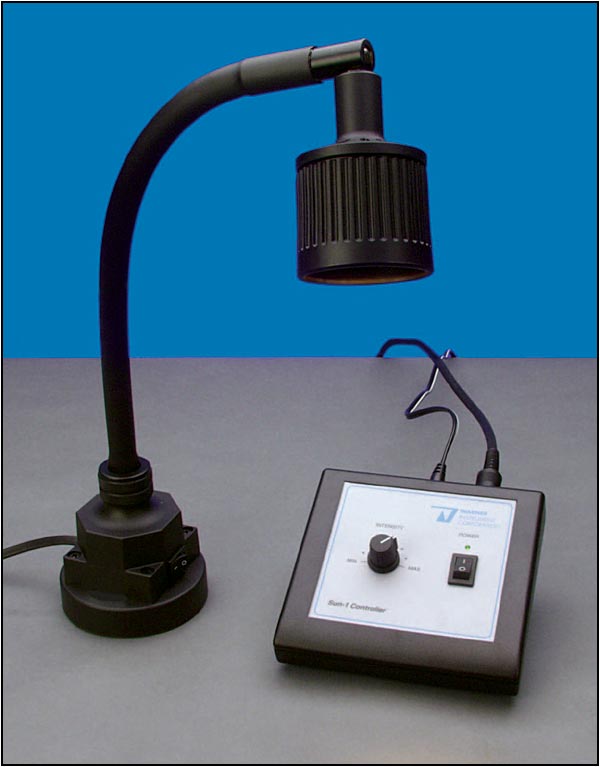 A dichroic reflector reduces much of the projected heat from the lamp and allows longer illumination times without significant warming the object under study.

Bilayer work often requires stirring of contents on both sides of a bilayer membrane. The SPIN-2 Bilayer Stirplate achieves this task by providing two spinning dipoles in a mechanically quiet apparatus.

Stirring of solutions in a bilayer cup and chamber has traditionally been achieved using a commercial stirplate. Unfortunately, these devices are not designed for use in a bilayer rig and present a single rotating magnetic dipole to the bilayer chamber.

A result of these characteristics is that it is impossible to simultaneously stir both wells since the stirbars will be drawn to a common rotational axis defined by the stirplate magnet. The resulting collisions between the stirbars and the bilayer cup introduces a noise artifact into the acquired data. Many researchers avoid this problem by not stirring while recording, which is an undesirable state of affairs.

The SPIN-2 stirplate from Warner Instruments is designed to specifically address these problems experienced by researchers in the field.

First, it has two separate spinning dipoles, one each for the cis and trans wells. This design allows the stirbars within each well to be independently controlled which virtually abolishes cup/stirbar collisions. The relative separation between the two dipoles is adjustable allowing the apparatus to be used with bilayer cups and chambers of different sizes.

Second, the rotation characteristics (speed and phase) of the two spinning dipoles is digitally controlled. This allows the device to present the minimum magnetic flux to the bilayer membrane. A liquid crystal display allows the researcher to view the rotating dipoles in real-time.

Third, the apparatus is both electrically isolated and mechanically quiet. In addition, steel strips are provided on each side of the liquid crystal window for attachment of magnetic holders and the like. This provides a convenient method of positioning a perfusion head.

Taken together, these features allow the SPIN-2 to be used while acquiring data. 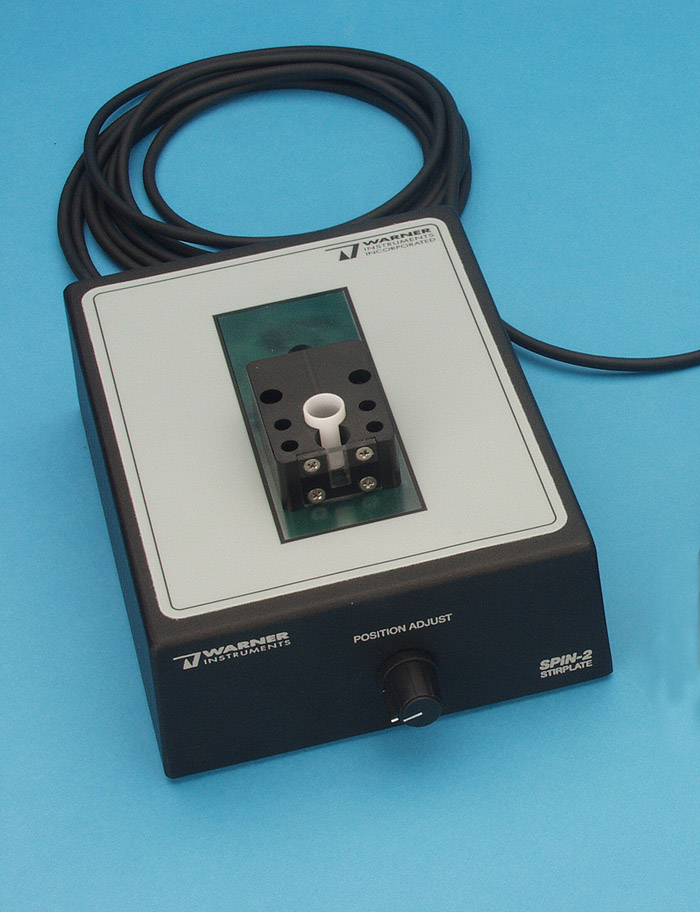 Customers from Europe and Australia can use the Multi Channel Systems - Online Shop to order Warner products or create quotes.

Want to know more about our quality products or need assistance in technical support?

TALK TO OUR EXPERTS

Warner Instruments is a data controller for the purposes of the General Data Protection Regulation ("GDPR"). By proceeding to tick the consent box at right, you consent to Warner Instruments processing your personal data, under the GDPR and any other applicable legislation, that we collect from you in accordance with our Privacy Policy. If you wish to withdraw your consent for us to process your personal data please contact our Compliance Team. Please address any questions, comments and requests (including your right to withdraw your consent to process your personal data) regarding our data processing practices to our Compliance Team.